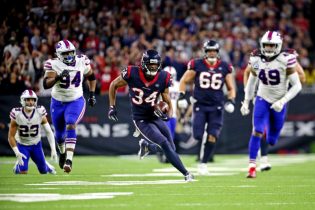 (Reuters) – The Houston Texans’ Ka’imi Fairbairn kicked a 28-yard field goal in overtime to clinch a 22-19 win over the Buffalo Bills in a classic AFC wild card playoff game on Saturday.

Texans’ quarterback Deshaun Watson escaped an almost certain sack to hit Taiwan Jones with a 34-yard pass at the Buffalo 10-yard line to set up the winning points in the game at Houston.

Stephen Hauschka’s 47-yard field goal with five seconds left in regulation had tied the score for Buffalo at 19-19 and forced overtime.

Buffalo started the contest with 16 consecutive first-half points behind quarterback Josh Allen before Watson brought Houston back with 19 points in a row.

The Texans, 10-6 in the regular season, will play either the top-seeded Baltimore Ravens or Kansas City Chiefs in the divisional round next weekend.