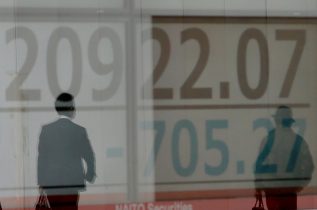 MSCI’s broadest index of Asia-Pacific shares outside Japan <.MIAPJ0000PUS> touched its highest point since June 15, 2018 in early trade, but later pared gains. It was last up 0.31%.

The index had finished at its highest close in more than 18 months on Thursday, lifted by a New Year’s Day announcement from China’s central bank that it would cut the amount of cash that banks must hold as reserves, releasing release around 800 billion yuan ($114.87 billion).

Against the backdrop of a thaw in trade relations between the United States and China, global markets have seen renewed appetite for risk assets.

“You have from both a policy and trade perspective a favorable framework for … risk assets for the weeks to come,” said Frank Benzimra, head of Asia equity strategy at Societe Generale in Hong Kong.

“The issue in our view, and that is the central scenario, is beyond these few weeks – where could we see a further correction?” he said, noting that the United States is unlikely to enjoy further fiscal stimulus before the presidential election in November.

But in an a fresh blow to stability in the Middle East, Iranian Major-General Qassem Soleimani, head of the elite Quds Force, and Iraqi militia commander Abu Mahdi al-Muhandis were killed early on Friday in an air strike on their convoy at Baghdad airport, an Iraqi militia spokesman told Reuters.

U.S. officials told Reuters that strikes had been carried out against two targets linked to Iran in Baghdad.

News of the strikes came after U.S. Defense Secretary Mark Esper said on Thursday there were indications Iran or forces it backs may be planning additional attacks after Iranian-backed demonstrated hurled rocks at the U.S. embassy in Baghdad following American strikes on Sunday against bases of the Tehran-backed Kataib Hezbollah group.

Esper warned that the “game has changed” and it was possible the United States might have to take preemptive action to protect American lives.

Equity markets remained unfazed as investors took further support from data on Thursday showing factory activity in China continued to grow at a solid pace in December, and that business confidence improved.

“The South Korea data, a bellwether for global trade and technology, shines a massive ray optimism confirming that the rebound in the world economy is taking place, which is being viewed in an extremely positive light by global investors,” Stephen Innes, strategist at AxiTrader, said in a note.

Markets in Japan remain closed for a national holiday.

The more optimistic outlook for trade and expectations that U.S. outperformance will gradually wane continued to depress the U.S. dollar, which fell 0.42% against the yen to 108.11. <JPY=>