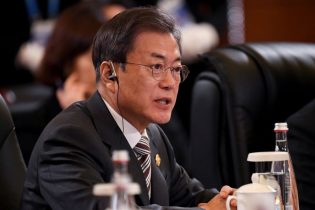 SEOUL (Reuters) – South Korean President Moon said on Tuesday he regretted the lack of progress in negotiations with North Korea, but vowed to keep trying to talk to the reclusive leader in Pyongyang.

Cooperation programmes between the neighbours have stalled amid rising tension with North Korea, which has blocked further public denuclearisation talks with the United States and threatened a harder line unless Washington offered concessions.

In his annual New Year’s speech in Seoul, Moon said he was “desperate” for practical ways to improve ties, called for new talks between the two sides, and vowed to keep up work to facilitate U.S.-North Korea talks.