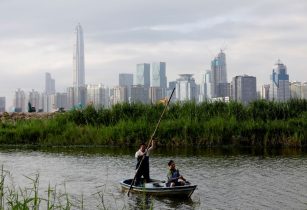 HONG KONG (Reuters) – More than two decades after Hong Kong returned from British to Chinese rule in 1997, a long border fence still threads between mainland China and the city today.

The varied landscapes and lives of residents wedged in these borderlands speak of two different systems that have co-existed on one another’s doorstep.

(Click https://reut.rs/2ZCU2tm to see a picture package of these borderlands.)

Far from the marches and salvos of tear gas and petrol bombs over the past half-year of anti-government protests that have convulsed Hong Kong, the residents in this border realm have borne witness to both rapid urbanization as China booms, as well as the preservation of a slower pace of life.

About 30km (20 miles) long, this boundary meanders between fish ponds, farmland, sleepy traditional villages and grassy hills on the Hong Kong side, with the gleaming skyscrapers of China’s high-tech city of Shenzhen on the other.

Shenzhen, once itself the bucolic backwater, has risen into China’s giddy vision of a digital, high-tech future.

Mr. Lam, now in his 80s, lives in a house without mobile phone reception, where he farms and catches crabs. A narrow sliver of water separates him from mainland China.

He recalls living in a wooden cabin along the ‘Shenzhen river’ with his family 70 years ago. There were only “old and broken” sheds on the far shore back then, he says, gazing into the distance.

“Of course, the mainland is much more advanced than before. Everything is good, even the streets are beautiful.”

Over past decades of political upheaval in Communist China, waves of mainlanders flooded across the border into Hong Kong, seeking peace and a better life. Mr. Lam still remembers the flashlights of the British-run police piercing the dark as they chased illegal immigrants making a dash for freedom.

Andrew Kwok, an old fish farmer living in the area, recalls those who drowned making the perilous crossing.

“There were a lot of them, hundreds of dead bodies in the river,” he said.

The flickering, lonely torches have now been replaced by a vibrant mega-city with a million flashing lights.

The living quality for people on both sides may have converged, but a gulf remains. For these two peoples, it remains a struggle to reconcile shifting eras, values and dreams.

Merrin Ke, 23, grew up in Shenzhen but got her master’s degree from Hong Kong’s Polytechnic University. She had flitted easily between both sides up until recently, when she moved to Shanghai.

“I think the situation in Hong Kong is quite sensitive now, which is easy for people to have conflicts due to different political stands. That’s why I’ve decided to leave Hong Kong to work and get away from the intense environment.”

Even though the protests in Hong Kong show no sign of abating, Ke remains optimistic unity will overcome division.

“Hong Kong people used to come to have fun in Shenzhen and people from mainland China also liked to visit Hong Kong. But now such things are becoming less and less.

“I still hope everyone can put differences aside, and it’s not enough for just one side to do this. It requires the joint efforts of both sides.”