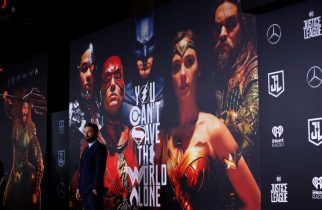 LONDON (Reuters) – English soccer fans are used to seeing heroes emerge in the historic FA Cup, but may not often witness the sport cross over with the world of Superman and Batman as it did on Sunday in Tottenham Hotspur’s third-round clash with Middlesbrough.

Supporters at the match at Middlesbrough’s Riverside stadium, along with millions watching across the world, would have seen digital billboards around the ground light up with the words ‘#ReleaseTheSnyderCut’ in designated minutes during play.

The slogan is part of a campaign to pressure Warner Bros to release director Zack Snyder’s cut of the movie “Justice League,” which features major characters from the DC comic book universe such as Superman, Batman, The Flash and Wonder Woman.

Snyder left the 2017 project in post-production and was replaced by Joss Whedon, who made considerable changes to the film which was released in November that year to mixed reviews.

Fans have since pushed for Snyder’s original cut, whose existence the director has confirmed on social media. Actors from the film, such as Gal Gadot (Wonder Woman), Ben Affleck (Batman) and Jason Momoa (Aquaman) have recently supported the campaign on Twitter and Instagram.

Warner Bros said last November there were no immediate plans to release an alternative version of the film, which was preceded by “Man of Steel” and “Batman v Superman”, also directed by Snyder.

However, campaigners have continued their efforts, and were able to crowdfund the money required to buy four minutes of advertising on the LED boards, with thousands tuning in around the world.

“This has been a two year struggle for Justice for Zack Snyder. It comes hand in hand with concern over excessive studio meddling in the artistic process that fails to honor the artistic vision of directors,” the organizers told Reuters in a statement.

The campaign has simultaneously raised funds for the American Foundation for Suicide Prevention, in memory of the loss of Snyder’s daughter during the making of “Justice League.”

“We hope that today’s efforts will primarily achieve three things. First, raise curiosity and awareness to a wide range of people, some of which may never have heard of our cause. Second, to energize our core support for the road ahead,” the campaign added.

“We will not stop until we achieve our goal. Third, to show WB that we can be a powerful marketing force for them and their films, if they do the right thing, and #ReleaseTheSnyderCut.”

The game did not endear itself to any potential new fans, as Jose Mourinho’s Tottenham, without their man-of-steel striker Harry Kane, labored to a 1-1 draw with the second-tier side. The tie goes to a replay at the Spurs stadium later this month.