Take Five: Euphoria to despair and back again 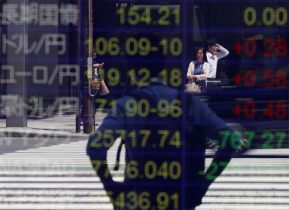 More than three years after Britons narrowly voted to leave the European Union, the Dec. 12 general election will effectively offer them another vote on how they want Brexit to proceed and if they still think it should go ahead.

Opinion polls showing the Conservative Party with a big lead have fueled a scintillating pound rally and ‘short’ sterling positions have been cut to seven-month lows; the belief is the Conservatives will quickly implement Brexit and end the uncertainty that’s weighed on the economy since 2016.

Polls’ patchy track record worries some people though, and that’s evident in derivative markets where two-week risk reversals – an indicator of bullish to bearish bets – are at two-month highs. And while currency volatility everywhere is at record lows, sterling vol is approaching this year’s highs.

What are the risks? One, that the polls have got it wrong and Britain will get another hung parliament. Second, if a Conservative win is already priced in, traders may be tempted to take profits, pushing sterling lower.

And focus will shift to the 11-month window for Britain to sign trade deals with the European Union. That prospect will likely keep the economy and markets jittery.

The Dec. 15 deadline for the next round of U.S. tariffs on Chinese goods is fast approaching and that’s keeping markets yo-yo-ing between despair and euphoria.

Signs of trade war damage have started showing up in U.S. data and we will now get the next dose of Chinese numbers on the ebb and flow of cash and goods. Sunday brings trade balance figures and, possibly, some lending stats. They will be the last set of numbers to land before policymakers hunker down at Beijing’s army-run Jingxi Hotel to decide 2020 economic targets. They will be hoping to see a rise in exports for the first time in four months. Loanmaking too should rebound from the 22-month lows of October, a seasonally slow month full of holidays.

But pressure is building for more fiscal and monetary policy measures. Consumer demand is soft, meaning the data may reveal falling imports. It might all hinge on what happens in the run-up to Dec. 15 – authorities will be looking for assurances from Washington on either holding off the tariff hikes or rolling back existing ones. So far there is no sign of either.

(GRAPHIC: China’s policymakers are under pressure to ease – https://ift.tt/2OWt1xq)

On Thursday, Christine Lagarde will hold her first meeting and news conference as European Central Bank president. She faces no immediate pressure to take any policy action – ECB stimulus announced in September and some stabilization in indicators such as Germany’s Ifo sentiment survey mean markets don’t really expect an interest rate cut through 2020.

Some of the extreme pessimism in bond markets has also abated, lifting German 10-year yields more than 40 basis points off record lows.

Yet Lagarde’s every word will be studied for her thoughts on the monetary policy outlook, the economy and an upcoming strategy review. And after eight years of the straight-talking Mario Draghi, expect the new ECB chief’s communication style to also fall under scrutiny.

There seems little likelihood the Federal Reserve will move the fed funds target rate at its Dec. 10-11 meeting; after all, it cut rates for the third time this year in October and signaled it would stand pat for a while to monitor the economy.

Jerome Powell’s post-meeting press conference may yield more interesting headlines. He could address tightness in the short-term interbank lending markets that sent repo rates briefly to 10% in September. Since then, the Fed has been stabilizing repo markets by offering to buy securities nearly every day. But given traders’ fears of another spike at year-end, the central bank is considering a standing repo facility that would allow banks to borrow as needed instead of queuing up in daily operations.

Reporters may also seek cues from Powell on mooted changes to the Fed’s monetary policy framework, especially after Fed Governor Lael Brainard’s recent comments endorsing a move to targeting average inflation, from the current 2% upper limit. The question is all the more likely because it will come hours after the release of the November Consumer Price Index. Core CPI is running above 2% but the Fed’s preferred gauge – the core Personal Consumption Expenditure – is undershooting.

It’s shaping up to be a busy week in emerging markets. Firstly, the blizzard of interest rate cuts is set to resume, with Russia slicing another 25 basis points off its 6.5% benchmark rate and Turkey expected to slash another 100 bps from its 14% rate. Brazil’s real recently hit record lows but that may not deter authorities from plans to cut the 5% interest rate by 50 bps.

Then there are the emerging market troublespots. Alberto Fernandez formally takes over as Argentina’s new president on Tuesday. Investors will hope to get an inkling of his plans to yank the economy out of crisis and get the ball rolling on restructuring sovereign debt.

Lebanon, also seemingly skidding towards default, is preparing to play one of its last cards. Caretaker Prime Minister Saad al-Hariri will jet to Paris on Wednesday to try a mobilize international support. Deep-pocketed Saudi Arabia and the United Arab Emirates are among those expected to be invited to a meeting.