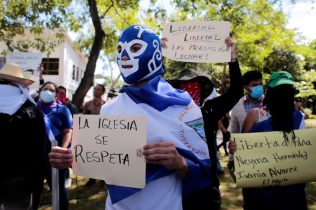 MANAGUA (Reuters) – A group of nine Nicaraguan mothers whose hunger strike became emblematic of protests roiling the Central American country were transported on Friday to a hospital in stable condition, according to a doctor treating the group and a Reuters witness.

The nine mothers, along with three activists opposed to Nicaraguan President Daniel Ortega, spent nine days locked in a church in the city of Masaya to demand the freedom of their children, whom they consider to be political prisoners.

On Friday, the group of protesters and a Catholic priest serving the church were transported to a hospital in the capital by a representative of the Vatican for treatment.

“Everyone is in stable health. Some are dehydrated from prolonged fasting and two are under observation for their chronic conditions,” María Eugenia Espinoza, a doctor who serves as director of Vivian Pellas Hospital, told reporters.

Father Edwin Román, the priest who joined the mothers, has complained on social media that after the group began their protest, the police cut off power and water in the church and prevented locals from assisting them.

Nicaragua’s churches have been transformed into political battlegrounds in recent weeks amid protests that have been raging for more than a year and a half.

Both the Organization of American States and the United Nations raised alarms this week about human rights in Central America’s largest country, as protests have intensified.

On Monday, Nicaraguan police arrested 16 anti-government protesters, accusing them of planning to carry out terrorist attacks. Some of their families say they were arrested after bringing water to the mothers in Masaya.