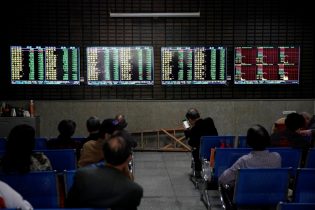 TOKYO (Reuters) – Asian stocks rose on Tuesday as an apparent olive branch from Beijing in trade talks with Washington added to other recent signs of progress, fuelling a rally in Wall Street’s main benchmarks to record highs.

The yen eased to a one-week low versus the dollar, while the Swiss franc traded near a six-week low against the greenback as the optimistic tone sapped demand for safe-haven currencies.

Oil prices gave up some gains in Asia in a sign that some investors remain cautious about the prospects for a lasting agreement to remove perhaps the biggest risk to the global economic outlook.

A quick resolution to the U.S.-China trade war is far from certain, because relations between the world’s two-largest economies have often been acrimonious and negotiations have stalled many times before.

“The broad trend is the markets are looking for a deal because trade has been the biggest factor weighing on global growth and holding back confidence,” said Shane Oliver, head of investment strategy and chief economist at AMP Capital Investors in Sydney.

“We have a low interest rate environment that is supportive of equities. If we get better economic news and relief from geopolitical risks, equities could rally further next year.”

Wall Street’s three main stock averages closed at a record high on Monday, buoyed by hopes for a trade deal and by M&A activity in luxury goods and online trading.

Traders pointed to China’s decision to increase punishments for intellectual property rights violations as a fresh concession to the United States in the drawn-out and volatile negotiations.

However, in a sign of prevailing market nerves, U.S. stock futures <ESc1> fell 0.02% in Asia on Tuesday.

The United States has imposed tariffs on Chinese goods in a 16-month long dispute over trade practices that the U.S. government says are unfair. China has responded in kind with its own tariffs on U.S. goods.

If both sides cannot reach an agreement soon, the next important date to watch is Dec. 15, when Washington is scheduled to impose even more tariffs on Chinese goods.

Elsewhere in the currency market, sterling <GBP=D3> traded at $1.2875, holding onto overnight gains as polls show the ruling Conservatives as runaway favorites to win a Dec. 12 election with a pledge to implement Britain’s divorce from the European Union.

U.S. crude <CLc1> dipped 0.12% to $57.95 a barrel in a sign of some investor caution. However, further declines could be limited before data this week forecast to show a decline in U.S. crude oil inventories.

In addition, the Organization of the Petroleum Exporting Countries (OPEC) meets on Dec. 5, where the bloc is widely expected to extend supply cuts to mid-2020.